What are the Options for fossil fuel industry to Drastically Reduce CO2 ?

Can we reduce CO2 without them at the table?

First, time is running out. E.g., PricewaterHouse Coopers: “7F is incompatible with organized global community, is likely to be beyond ‘adaptation’; is devastating to the majority of ecosystems and is not stable but lead to higher temperatures. …world needs RADICAL transformation… rapid uptake of renewable energy…sharp falls in fossil fuels or massive deployment of CCS…”

2nd: Where is energy generated in America & for what?   From US Energy Information Administration: 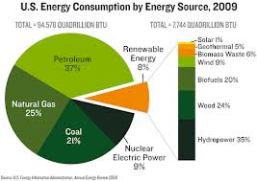 Note  that 93% of oil is for transportation. Note also only 9% (2012) is renewable; mostly old hydro. This is a mountain to climb.

If we do not drastically reduce CO2 from a large % of Utilities & steel and cement plants then the planet will get much too hot. It does not matter how efficient in use we become, nor if we switch all cars to EV –these sites generate too much CO2. It is generation that must be controlled.

Ideally this would all be renewable energy; BUT with trillions of $ at stake and many good paying jobs & cheap Nat gas and 94% of the current energy generation – the fossil fuel industry will NOT just roll over and play dead.

Nor will the public support more expensive energy; until huge catastrophes with direct links to climate change are seen.

Thus, it is doubtful that we can switch to over 50% renewables or nuclear in the next 30 years fast enough to reduce CO2 without the option of CCS.

Currently the fossil fuel industry refuses to discuss the science or the risks. But they must be at the solutions table with CCS –if we have any chance in hell of dramatically reduce their Greenhouse emissions.

Key points: “CCS is the only technology available for decarbonisation in the iron, steel & cement industries “ – I would argue the Electricity sector also, unless you move to Renenergy or nuclear.

* This technology is being tested globally but most of the units are capturing CO2 for EOR (enhanced oil recovery) and not put into deep aquifers.

* There are only 8 large scale projects underway with 8 more in construction. Just 2 in the electricity sector.

* Governments must provide regulations and money to make this happen

* While deep well storage is a well used and understood technique. Each formation is unique and requires millions of dollars just to assess each formation. And these should be within 100 mile of the capture point (e.g.: utility) for cost containment. These can be under the ocean.  Geological storage is the most important public perception challenge and greatest long term financial liability associated with CCS projects.

* Cost estimates should include both the capture & condensing of the CO2 and then transport in pipelines to deep formations . Thus costs range from 40 % to 100% increase in electricity . So early units will be pricey. But off shore wind and nuclear are also expensive. And they are probably more complex.

* Norway has opened a billion $ industrial scale test center for carbon capture (not deep storage). China has 5 locations working on scale up and burial; The USA should begin operation in 2014 at the Kemper county power utility and Canada at the Boundary Dam. These operations will “learn by doing.”  South Africa and Australia have large scale units under construction.

So my assessment is that we can fight until the temperature gets so hot billions of people die (and sea level washes away cities or famines set in) or we can work with them to encourage CCS as one of the key important solutions.

Yet, I never hear CCS mentioned by any advocacy groups. I suggest they are not being realistic. Perhaps I have missed something ?

Carbon capture and sequestration is the process of capturing waste carbon dioxide (CO2) (various technologies ) from large point sources, such as fossil fuel power plants, transporting it via pipelines to a storage site, and depositing it where it will not enter the atmosphere, normally an underground geological formation (with centuries of monitoring,tho the CO2 should react with the minerals and stay in place). Although CO2 has been injected into geological formations for several decades for various purposes, including enhanced oil recovery, the long term storage of CO2 is a relatively new concept.