Resist on health care, resist on everything! 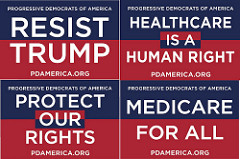 Our current health care “system” is such an undependable patchwork as to be, for many Americans, crazy.

For years Democrats have been saying that Obamacare, officially the Affordable Care Act (inspired, incidentally, by Mitt Romney’s program in Massachusetts) is imperfect but a good step forward while Republicans (even some benefiting from it) say Obamacare is “big government” at its worst, even though it leaves the insurance industry in the driver’s seat and transfers taxpayer subsidies to private companies.

In our change-averse country, nothing is truly new and everything builds on something else. Obamacare did not create a national health system; it made some improvements, especially in making people with preexisting conditions eligible for insurance, allowing children to stay on their parents’ policies till age 26, and reducing the number of uninsured Americans by 20+ million.

Insurance companies were a willing part of the Obamacare deal but now should we be surprised that they, like pharmaceuticals, are raising their prices? Their job is not to help sick people but to turn a profit.

Now the public option is back on the table….

continue reading at The Times of Chester County

Bill was right: it’s a crazy system (part I of II)

Bill Clinton was right about health insurance when he controversially said on October 3:

“…The people that are getting killed in this deal are small business people and individuals who make just a little too much to get any of these subsidies. Why? Because they’re not organized, they don’t have any bargaining power with insurance companies, and they’re getting whacked.

“So you’ve got this crazy system where all of the sudden 25 million more people have health care, and then the people are out there busting it, sometimes 60 hours a week, wind up with their premiums doubled and their coverage cut in half. It’s the craziest thing in the world.”

Obviously, Bill the policy wonk was getting worked up, as you can see from the video of his remarks. And there’s a reason. He and Hillary have been trying to solve this country’s health insurance problem for 20+ years and meanwhile many Americans’ health is still jeopardized by lack of proper medical care and insurance. This is not a theoretical problem. Consequences for individuals range from illness and inconvenience up to loss of homes and death; consequences for society include the current scandal of maternal mortality in Texas and the possible spread of wide-spread preventable epidemics.

Pennsylvania’s recent experience shows why health should not depend on politics….

continue reading at The Times of Chester County

Statement on AARP’s sponsorship of ALEC

Statement by Richard Fiesta, executive director of the Alliance for Retired Americans, regarding AARP’s sponsorship of the American Legislative Exchange Council (ALEC):

“We’re deeply disappointed to learn that AARP is sponsoring ALEC, an organization that has supported state efforts that hurt seniors and working Americans.

“ALEC is a major force behind the rise of state Voter ID laws, which disproportionately hurt seniors and take away their ability to cast their votes, and have opposed efforts to rein in prescription drug prices.

“Other companies, including Ford and Google, have withdrawn their support for ALEC. If AARP truly represents the interests of seniors, then it should do the same.”