People are being pulled off planes and pushed into detention centers in airports across the US today — legal visa holders, visitors, refugees, even the green card holding spouses of American citizens!

And we are fighting back.

People are gathering at your airport to protest this inhumane and racist treatment. Let’s join them and add strength to this protest. Showing up in the terminal now can be the beginning of a national movement that endures and wins. Here’s the Facebook link for the protest near you:

Check this link for any updates to the time or location

This is not an approved action. And that means people might get arrested and non-citizens might face extra threats. There will be many more chances to get involved after this, and this protest might not be right for all of us.

For those who can, make your way to the protest in the link above. Also, the resistance movement needs lawyers to help represent those detained. If you, or someone you know, fits the bill please fill out the form here:

This is last minute, and risky, but the faster we mobilize, the faster the courts, Congress and Trump feel the heat of a massive public outcry.

Donald Trump’s inaugural address, for which the heavens wept, culminated a strand of American conservatism that has been with us since Republicans began attacking Franklin Roosevelt. It is to refocus any anti-elitist sentiment away from finance and big business, and toward the political establishment.

In one form or another, it has long been a defining motif of the American right, stretching from Joe McCarthy’s allegations of treason by striped-pants diplomats, to George Wallace’s attacks on pointy-headed bureaucrats, to Ronald Reagan’s war on government, up to Trump’s assault today on Washington for selling out the (largely white) factory workers to the benefit of—as Trump put it—themselves.

“Their victories were not yours,” he noted. Their days of power, of betraying American workers, were at an end.
Missing from his indictment, of course, was the real American elite: Wall Street

Missing from his indictment, of course, was the real American elite: Wall Street, which urged CEOs to boost profits by offshoring labor, and those CEOs themselves, who have linked their income over the past quarter-century to their ability to boost those profits by suppressing wages (no better way to do that than to substitute developing-world workers for those here at home). As Trump told the tale, it was Washington alone that shuttered the factories and reaped the gains—not the masters of our economic universe who made the really big money from all these shifts, and used that money to fund the politicians’ campaigns. Trump wasn’t wrong to assail the Congresses and presidents who promoted trade accords at the expense of the factory and mill towns, but his indictment was strategically sanitized….

continue reading at The American Prospect

Filed under US President 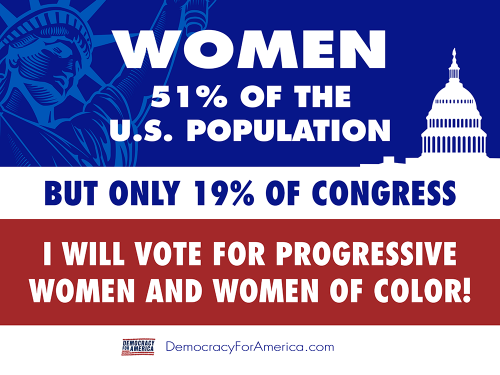 from Democracy For America

Filed under US Congress - other, Women's Issues

Tagged as women in office

Those who turned out for the gathering organized by Democratic State Sen. Daylin Leach of Montgomery County had come following two months of anger and frustration over Donald Trump’s win in November.

They were told to form Facebook pages with like-minded friends and try to expand followers; consider putting their “bodies on the line” in acts of civil disobedience in the years to come; and, in the words of one Democratic political consultant, start to mirror the tactics that Republicans have used to win power in Washington and in a majority of state capitols across the country.

The goal of Daylin’s Resistance Forum, he said, is to preserve policies and institutions that progressives hold dear and that Republicans appear poised to dilute or dismantle.

“The end of democracy is not inevitable,” Leach said, “but there are warning signs.”…